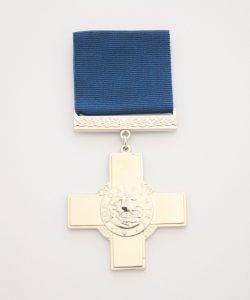 or 4 fortnightly payments from $7.50 with

Instituted by King George VI in 1940 in recognition for acts of great bravery and conspicuous courage. The George Cross is second only to the Victoria Cross as the most prestigious decoration. The cross, which is struck in silver, has been awarded only ten times to Australians. One of these was in exchange for the Empire Gallantry Medal, which the George Cross replaced, as it did the Albert and Edward Medals.

Be the first to review “George Cross Miniature” Cancel reply