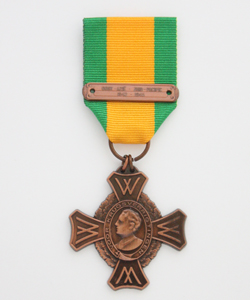 or 4 fortnightly payments from $8.00 with

The Netherlands War Cross was instituted on March 16th 1944. The decoration was intended for military in Service of the Kingdom of the Netherlands, Dutch People or Dutch subordinates that served on board of Dutch Merchant or Fishery ships in Dutch or Allied service and Dutch Citizens or Dutch subordinates that were part of the crew of an airplane from the Dutch civilian Air Services in Dutch or Allied service.

To apply for the decoration one had to be serving for six months in service since May 10th 1940 and had to have shown good service and behaviour, also issued to Australian Commandos in Dutch Timor.