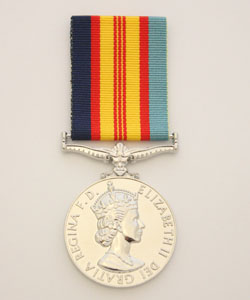 or 4 fortnightly payments from $6.25 with

Awarded to members of the armed forces and nurses for service in Vietnam. Qualifying period was 1 day for Army and Air Force and 28 days afloat in territorial waters for the Navy between 29th May 1964 and 27th January 1973.

Approximately 50,000 were issued to Australians.