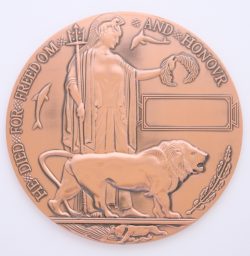 or 4 fortnightly payments from $9.63 with

WWI Kings Memorial Killed In Action Plaque. It was decided during World War One that all next of kin of service personnel who lost their lives as a result of the war would be presented with a memorial plaque and commemorative scroll from the King and country.

The plaques were cast in bronze. On the plaque itself no rank was recorded as the intention was to show equality in their sacrifice.

WWI Kings Memorial Killed In Action Plaque is 12cm in diameter $55.50. Also is available in a smaller size of 8cm in diameter $38.50.
The troops referred to them as “The Dead Mans Penny”.