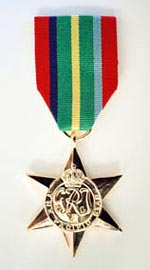 While it may come as a surprise to some, the colours of each Campaign and Service Medal ribbon are very relevant to the nature of each award. With many of the ribbons, particularly the Second World War series, it should be noted that often the three Forces are represented by their respective colours of dark blue for Navy, red for Army and light blue for Air-Force. The Navy being the senior force dictates that their colour is represented first on the left of the ribbon.

With some basic knowledge of the ribbon colours it is possible to recognise what campaigns were endured by an Ex-Serviceman. The overwhelming majority of Australian soldiers performed their duties in New Guinea and the Pacific region in defence of the aggression of the Japanese invasion. The standard medal entitlement for these servicemen was a) 1939-1945 Star, b) Pacific Star, c) War Medal 1939-1945, d) Australia Service Medal 1939- 1945.

Other medals common to Australians were the Africa Star with the sands of the desert and the Defence Medal with the greenery of the countryside against the blackouts and fires of London. Other Campaign Stars issued were the Air-Crew Europe Star, with the daytime and night-time skies and searchlights, the Atlantic Star with the colours of the ocean, the Burma Star, the Italy Star, and the France and Germany Star, with the respective colours of their flags. These five stars were issued to only a limited number of personnel attached to the RAF and to members of the RAN and Merchant Navy. Campaign Medals for Korea, Vietnam and the recently issued Australian Service Medal and Australian Active Service Medal all have ribbon colours identifiable with the particular campaign and participating forces.